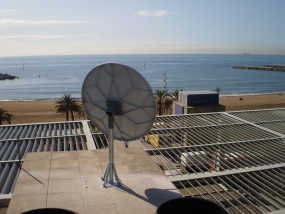 In 2008 was installed an EUMETCast receiving system. EUMETSAT’s Broadcast System for Environmental Data, is a multi-service dissemination system based on standard Digital Video Broadcast (DVB) technology.  It uses commercial telecommunication geostationary satellites to multicast files (data and products) to a wide user community.

In the last years, a near real-time system has been developed allowing to acquire data, process it until obtaining temperature maps of the Western Mediterranean at its maximum resolution (nadir) of 1.1 km, and publishing them in a web in approximately one hour. Sea Surface Temperature maps, NOAA QuickLooks, temperature from a Spanish network of environmental buoys (i.e. coastal buoys from Puertos del Estado), monthly videos from daily temperature maps, daily temperature maps and netCDF products are generated. Also, there are historical wind data (from 1999) and chlorophyll (1997) until 2006. All these data can be viewed with satellite data web app as SAIDIN (developed at ICM) and THREDDS distributes raw NOAA/METOP data. More information about near real-time system developed here.

In August 2001 an HRPT (High Resolution Pixel Transmission) system was acquired at Data Tools Products in France through Indra Espacio. It was full operational in August 2002. This antenna stops using in 2008 when company went into liquidation.

This site provides up to date status information on each spacecraft and its various subsystems.