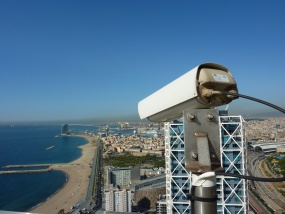 The Sirena Video System is part of the Coastal Ocean Observatory of Institut de Ciències del Mar (Institute of Marine Sciences, ICM-CSIC, in Barcelona, Spain). It consists of 6 unattended video cameras located at the top of Mapfre building at 142 m. near from the Olympic Harbour of Barcelona. It is designed to sample video images and return them to a central data collection system, and to do limited data processing on live video streams at the remote site. From that height (142m.), a panoramic view of the Olympic Harbour and three of the city beaches, Bogatell, Nova Icaria and La Barceloneta, is viewed. The beaches Mar Bella and Nova Mar Bella can also be observed, but with less spatial resolution.

The system consists in two computers, the first is the "Sirena Station" located af Mapfre tower which is an Linux Ubuntu workstation; it stores the data only long enough until be transferred to the second computer ("Sirena network system") that stores the data and makes it available to the user. Also, when required, sends the data back to a central Sirena site for other users. The storage system is also a GNU/Linux with CentOS connected to the Internet. Every daylight-hour the cameras of the Sirena Station get one picture per second for a ten-minute period and after that 3 products snap (a snapshot image), timex (a mean of the 600 images acquired during first 10' of each hour) and var (a variance of the 600 images acquired during first 10' of each hour). The Sirena Station is comunicated with ICM through a DSL connection. The system components are:

The components of the system are:

The use of video monitoring stations such as the Argus system has spread worldwide during the last decade. However, video monitoring of both natural and artificial beaches of the Mediterranean Sea, with its distinctive wave and bathymetric conditions, are scarce. In particular, monitoring a natural, multibarred and dissipative beach close to Barcelona (such as the southerly located beach of Castelldefels) would also allow a comparison between the evolution of natural and artificial beaches subjected to similar hydrodynamic conditions.

The site consist of five SONY XCD-SX90CR IEEE1394b 1280x960 Raw color video cameras deployed at 32 m high in Castelldefels (Barcelona) about 20 km southwards of the Barcelona station. Images are collected since April 2010 using SIRENA software developed by Miguel Ángel Nieto at IMEDEA (CSIC). Statistical products are generated and transfered to the Argus network system that do some process, stores and publish data on the web.

The scientific exploitation of the images is a joint agreement between ICM-CSIC and the Grup de Morfodinàmica Costanera (UPC) in the frame of the Project “Integrated Modelling and Monitoring of Morphodynamics of Natural and NOurished BEaches (IMNOBE)” (CTM2009-11892). Simultaneous video observations at two different beaches generate morphological information from reflective and dissipative beaches, either embayed or open beaches, affected by the same wave climate. One the main objective of the Project is the comparison between observations from Barcelona and Castelldefels systems and the use of these data for comparison and assessment of model results. Video observations will be also supported by bathymetric and topographic surveys.

The new site in Sisal (Mexico) deployed in 2011 was a challenge. In the first place, the distance between the acquisition PC and the cameras was around 50 m implying that the previous firewire connections were not an option. As a solution, the AVT Stingray F125CF camera with fiber connector was chosen. However, as a result of this hardware change Sirena software improvements were once more needed. Unfortunately, AVT cameras are unable to send raw8 images in Format_2 mode. The main advantages of the raw image format are the use of less bandwidth and the reduction of camera internal processing. AVT cameras only allow the acquisition of raw8 images through the Format 7 image video mode, a scalable or user-defined image format. This format has the benefits that it allows pixel binning and defining a region of interest (ROI) to read out enabling the camera to send images at faster frame rates but, on the other side, it has the drawback that the frame rate settings do not apply in Fomat_7 as the frame rate is determined by the size of the data packets (a.k.a. packet size or byte per packet), a value that depends on the image length, the byte depth and the packet size.

Sisal is located northwest of Merida in the northern coast of the Yucatan Peninsula, Mexico. Two main characteristics of this part of the Gulf of Mexico are the broad continental shelf of approximately 245 km with a beach slope of about 1:1000, and a distinctive low lying coastal area with the presence of barrier islands. Sisal receives a mixed tide with a diurnal dominance. The tidal range varies from 0.1 m for neap tides to 0.8 m for spring tides. The beach is subject to a wave climate predominantly from the NE direction and to extreme wave events during winter by high pressure polar outbreak systems called Nortes, and by cyclonic systems known as Tropical Cyclones (including tropical depressions, tropical storms and hurricanes) during the summers. Mean significant wave height at a depth of 10m for Sisal using hind casted data from 1979 -2008 is 0.75 m with a standard deviation of 0.4. From a morphodynamic point view, Sisal is a dissipative beach with the presence of a submerged alongshore bar system formed by two to four alongshore parallel bars. Grain size values, available for one beach profile in the area, show a D50 of 0.45 mm.