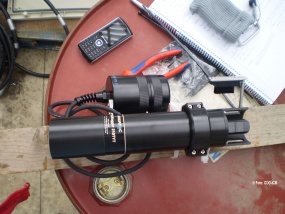 Turbidimeters are instruments for measuring  for measuring the suspended sediment concentration on marine waters. Fluids can contain suspended solid matter consisting of particles of many differents sizes. We have two of them. The first one is 2m depth and the second one is into a metalic structure with the current meter.

The turbidimeter incorporated into the metalic structure is an OBS-3 and is located approximately 10m depth. OBS-3 detects light scattered between 140° and 160°

AWAC current meter and turbidimeter in a white methalic structure

The AQUAlogger 210TYT uses the tried and tested SeaPoint STM turbidity meter. The STM has four switchable gain ranges. These can be pre-set by the user or automatically selected by the AQUAlogger for maximum dynamic range in field deployment conditions.